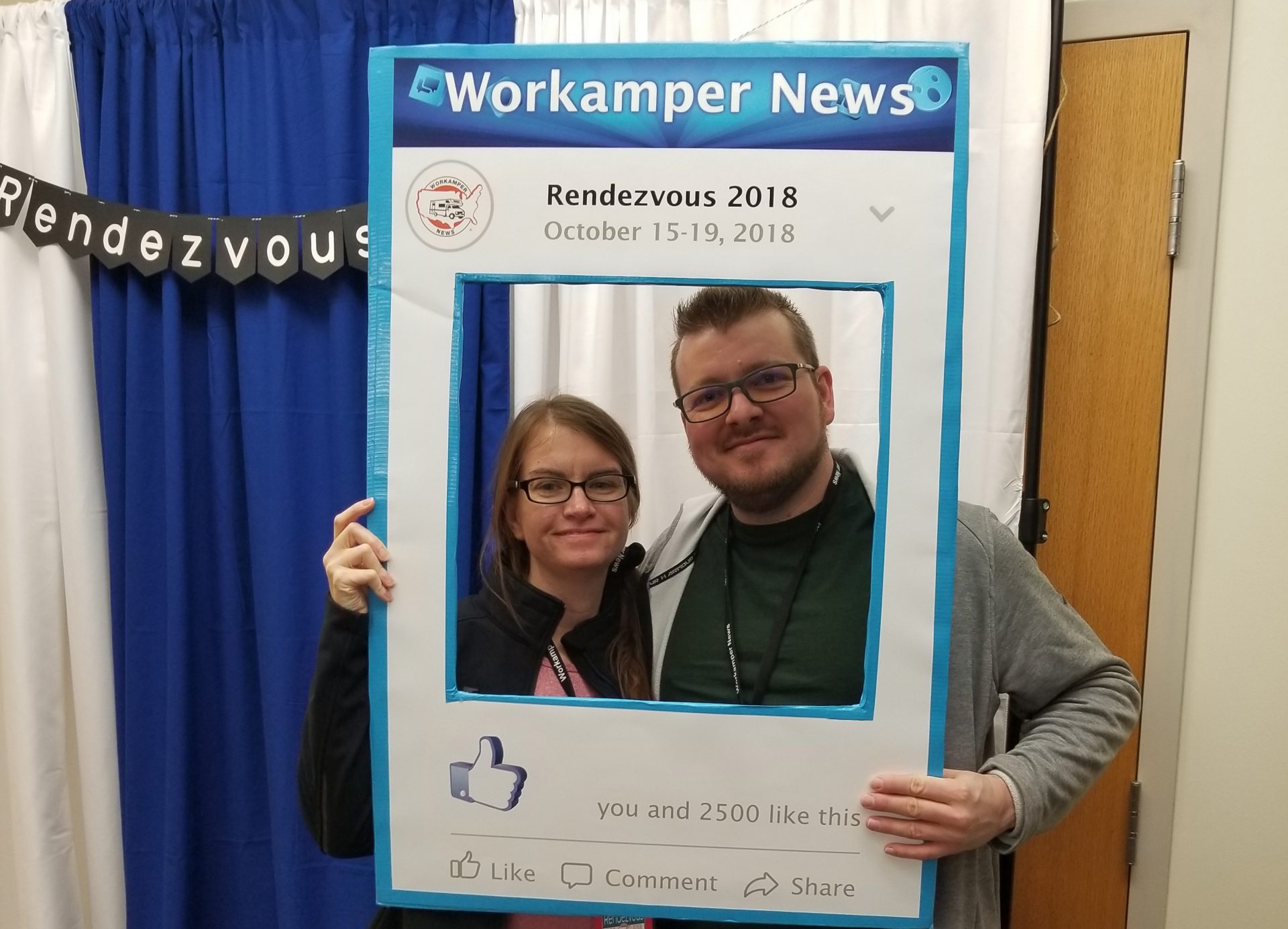 In August of 2018 we were just beginning our journey. We’d done some window shopping but we still had to sell my house before any real movement could be made. But, it wasn’t too early for us to attend Workamper Rendezvous event and learn as much as we could about living and working from a home on wheels.

We previously shared a bit of what we learned at Workamper Rendezvous, but in this post we want to share a bit of what you can expect at the event.

What is Workamper Rendezvous?

At first we weren’t sure if this event was even a good idea for someone who wasn’t even actively RVing yet, let alone ready to do it full time. But, the more we looked into it the more of a good idea it seemed. It would get us away and allow us to experience and learn more about this lifestyle, before we jumped in with both feet.

Is Workamper Rendezvous a good idea for people who don’t even own an RV yet?

I first began seeing ads for the Workamper event on Facebook in August of 2018. Either Facebook heard our private conversations, or it saw that we’d joined a couple of full-time RV living Facebook groups in an attempt to research and learn (probably the latter). We weren’t really sure what it was, but looking at the described seminars it sounded like we could learn a few things.

While we didn’t see an actual schedule until we arrived at the event, the topics listed on the event website ranged from choosing the right RV (we could definitely use help there) to making a living on the road, and even accounting for Rvers. Each day was full of seminars (4-6 sessions a day). We hoped that attending could help us answer a lot of questions.

Heber Springs is in the middle of nowhere, so we weren’t sure what we could expect there. Thankfully, in addition to two really great RV parks in the area, there are also a couple of decent hotels. The event organizers provided the info and let me know that we likely wouldn’t be the only ones there without an RV. That made us feel a lot better about attending.

What is the average age of attendees?

When we attended, the average age definitely skewed towards retirement. There were only a small handful of people that were younger than that (probably less than 10%). That said, we didn’t feel uncomfortable in any way. So, if you are younger don’t let that stop you from attending.

What should you bring to Workamper Rendezvous?

If you are already living in an RV, then bring it with you. There are two beautiful RV parks to stay in, including one run by the Corps of Engineers.

Pack for any potential weather. It’s late October in Arkansas, expect it to be chilly (but be prepared for surprises).

Bring your own alcohol (from a different county). Heber Springs is in a dry county, and the nearest alcohol is 50 miles away. There is at least one restaurant that serves in the county through some weird private-club legality. But, if you want a drink, just plan on bringing it.

Bring an open mind and a readiness to learn. You’ll learn a lot during the event and probably be presented with some ideas that hadn’t occurred to you before.

Do you have to attend every session?

No. We skipped several sessions during the event because they were topics we either weren’t interested in or already had under control (like the session on why every RVer should have a blog).

Breaks are provided each day giving you plenty of time to go back to wherever you are staying or visit a local restaurant to eat. We were staying at a hotel, but picked up items to make sandwiches and a few things that could be microwaved, to allow us to save a bit of money on food.

There are a few restaurants in the area, including a great little coffee shop downtown that even had gluten-free bread!

Are all the sessions included?

No. A few sessions were extra. Unfortunately, in our opinion, these were some of the sessions we thought would be most beneficial, including a half-day Small Business summit with a lawyer. We really wanted to attend that session but it was on Saturday (technically after the main event) and we’d already planned to head home. Had we had more info on that session in advance we definitely would have planned to attend.

Is there a sales pitch?

As with so many conferences and seminars, yes there are sales pitches. Not just one. We’d go so far as to say the entire conference is basically a sales pitch to get you to join Workamper News – which is probably a good idea if you decide that workamping is something you want to pursue.

Additionally, many of the presenters had their own sales pitches, for their products, services, websites, etc. Some were less obnoxious than others. Overall, we still felt the event was worthwhile and for the most part the sales pitches were not so intrusive as to take away from what we learned.

What will you learn at Workamper Rendezvous?

We learned the most at Workamper Rendezvous by just talking to the others who attended and attending the RV Open House. Many of the RV owners opened their homes for others to tour during the Open House. Visiting them gave us a lot of insight into how people actually live in their RVs. It’s one thing to look at empty floorplans but to be able to see how people use the space is entirely different.

It was through the RV open house that we realized that we could actually make a Class A work for us.

From the conference itself we learned about the types of workamping and for whom they are likely to work best. We learned whether or not workamping was right for us (in the traditional sense, we don’t think so).