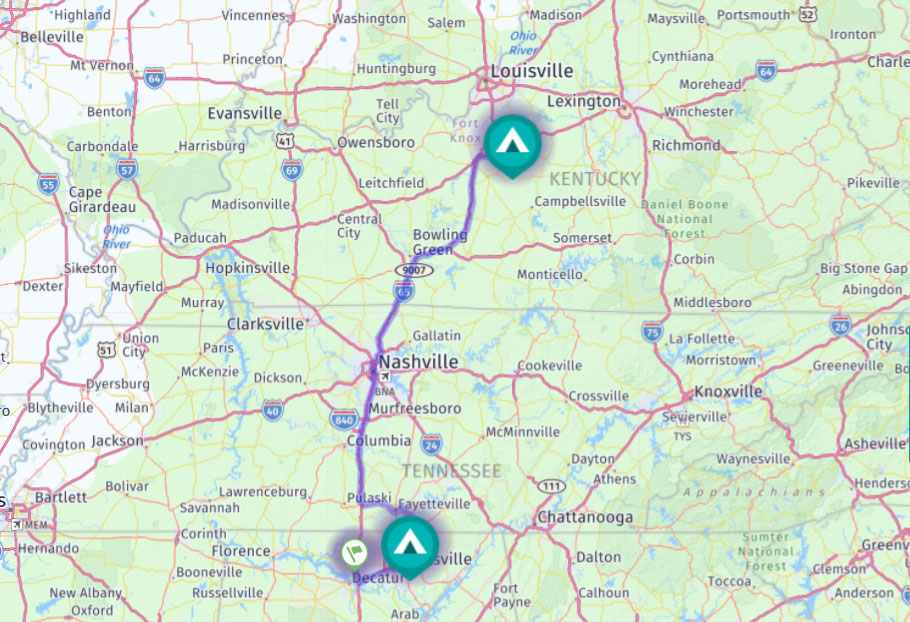 Although month 10 involved very little actual travel, it was one of the was busiest and stressful months we’ve had since we hit the road. Between trying to register a car, dealing with a cracked rim on the rig, and a leak in our black tank. It felt like there issues would never end. 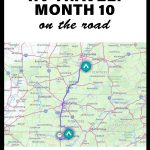 This last month has felt like death by a thousand cuts, or playing whack-a-mole with a clan of dragons, where every one step forward resulted in two steps back. In the last month we saw our family, dealt with doctor appointments, bought a car, replaced a tire on the rig, and repaired a leak in our black tank, and we hit the road to head north across the country.

Month 10 by the numbers

Where we spent month 10

We had originally planned to be on the road for most of the month. We’d planned to spend a couple of weeks in Kentucky, followed by a week in Ohio. But, if one thing is certain in RV life, it’s definitely not plans. I don’t know what it is, but it’s not plans – at least not for us.

Instead, we spent the entire month in North Alabama. We started the month at Northgate RV Park in Athens, and spent the rest of the month at Sharon Johnston Park in New Market, AL. Both places we are quite familiar with at this point.

We had originally planned on spending that week at Northgate, taking care of some doctor appointments and seeing family before heading north. Then we decided to buy a car.

We thought that buying a car would be a pretty easy task. Our original plan had been to buy a Jeep. Brandon loves Jeeps. He sold his last Jeep to buy our truck, and it just seems like the perfect vehicle. Until, I tried to drive one. I have a history of lower back issues that have limited what vehicles I can drive. After a decade in the same vehicle (a Kia Soul I’d traded into so that I could drive comfortably), and then (surprisingly) not having any issues driving the truck (Ford F450), I’d kind of forgotten that most cars cause me pain. Driving a Jeep reminded me of that.

With a Jeep off the table, we had to start from scratch trying to find a good car that we felt confident in taking north and that we felt would hold its value well should we (as we plan to do) sell it before we leave Michigan. Thus began a week-long search for the perfect car. We quickly found the Toyota Rav4, but also found that used ones are in short supply. A week later we finally found one in Tennessee. We’ve heard that buying a car in Tennessee is a bad idea (at least if you aren’t from TN) and after the last month we’d say we probably agree, but that’s another story for another blog post.

After spending a full week just finding a car, we decided that we’d rather rest than hit the road. So, we headed over to Sharon Johnston Park. This place feels like a second home to us, and really gives us a sense of calm just pulling in – no matter where we’ve come from. This time was no different.

We ended up a really great site. Just before we were there last year they had paved their pull-throughs. This one is next to a site that is almost never used, unless they are full. Otherwise, it’s used as a road. And, the site on the back side of us was also empty during most of our stay. This gave us great views of the nearby woods, and kept us from feeling cramped at all.

The park is just minutes from my mom, so we were able to get over and visit with them easily and we did spend our first week there relaxing, mostly. Unfortunately, that didn’t last long.

After just under a month at Sharon Johnston and yet another change of plans, we were finally able to hit the road on April 30 and head north into Kentucky where we spent a night in Bardstown. We plan to head back that way in the fall and spend a bit more time in that area checking out the distilleries and caves that surround the area.

The nightmare of car registration

When we bought the car the dealership didn’t tell us the process for registering it, so we assumed that it would be the typical process of just going into the county, handing over our purchase paperwork and getting an Alabama tag. But, when we arrived we learned that is not the case. As I write this a month later, we’ve still not gotten the car registered. Instead we spent the last few weeks trying to get everything in order, so (hopefully) when the dealership finally sends the correct paperwork to our county Brandon’s parents can register it for us.

Then the black tank leak

We’ve thought we might have some sort of black tank issue for a while. We even had our RV repair place take a look at it. They didn’t find anything and deemed it fine to use. Yet, we kept getting smells (both inside and outside). And, twice we’ve had leaks from the bottom of our rig that went undiagnosed. The latest time was while sitting at Sharon Johnston. We finally had enough and Brandon decided to see if he could find anything.

We were on a nice concrete pad so it seemed like a good time to climb under the rig and pull down the underbelly covering. We couldn’t find any issues there. So, we pulled everything out of the basement and removed the wall so we could access the plumbing from our main bathroom. Initially, it still didn’t look like we’d find anything and then Brandon spotted it, a break in the seal where the pipe from the toilet enters the black tank. The break allowed for gasses to escape – thus the smell. And, if the tank got full it would also allow for more than just gasses to escape.

Thankfully, Brandon is pretty handy and he was able to get everything sealed back up. Hopefully, it will remain that way.

And, a cracked rim

If you read last month’s post, you saw that we had our first flat tire just as we were leaving Lake Guntersville State Park. While we were in Athens we took the tire to our local tire shop and they were not able to find the leak. We deemed it a slow leak and opted to just go ahead and replace the tire.

Just a few days before we were scheduled to leave Sharon Johnston, Brandon went to check the pressure in all our tires only to find that brand new tire flat. Thankfully, we had not put it back on the rig, and it was still just sitting in the back of the truck. He pulled it down and sprayed it with soapy water. Nothing. Then sprayed the rim. The front still showed no issue, but when he turned it over and sprayed the back side of the rim, we saw it. Bubble bubble, toil and trouble. The rim was cracked.

We found that on Tuesday night. Wednesday, in addition to having to drive to the next county to deal with paperwork for the car, we had to try to track down a rim that would work. Thankfully, we did find one and we were able to drop it off to be dealt with while we did other things. And, we still had to get the underbelly covering back on the rig so we could leave on Friday. It was a busy week. But, we did get on the road, finally!

This was not our most expensive month to date, but it was up there. All the constant going resulted in eating out way more than normal. Plus, we stocked up on a few necessities at CostCo, and foods that we weren’t sure we’d be able to get later. Replacing a tire and rim, and fixing our black tank further added to our costs.

Our major expense was groceries. We stocked up at CostCo on some necessities as well as stocking up on some local items that we knew we wouldn’t be able to get once we hit the road again. Total grocery bill came to $918.

Our site rent was fairly cheap (one of our cheapest months yet) at $640. It was so low mainly because we spent most of the month in one place and we were able to get a monthly rate.

All the constant going meant we ate out way too much, so that total was rather high – actually this was the most we’ve spent on dining out since we hit the road, for a total of $628.

Our fuel costs were moderate, likely because of the new car. Given how much driving we did back and forth across the county, seeing family, and trying to deal with car registration issues, we’d probably have spent twice as much if we’d had to drive the truck. As it was our total fuel cost was $355 (just over $100 of that was in the car).

And finally, those special costs – they totaled at about $675. These included replacing both the tire and the rim, and buying some new tools to make sure if we ever have to replace another tire, it’s not an issue. Plus there were multiple Lowe’s trips to buy what we needed for the tank repairs. We’ll end up spending a bit more when we get settled in Michigan to replace the underbelly covering. Hopefully, sitting still through the summer will make it easy to take care of a variety of maintenance tasks that we need to do – or maybe we’ll just find a new RV!

What we’d do differently

We definitely wouldn’t buy a car in Tennessee again. Had we known we’d end up staying in Alabama for the next month we would have taken more time to find a car, and bought from an individual with title in hand. But, that’s with hindsight. Unfortunately, we just don’t know what we don’t know. But, we know what to avoid for next time.

Plans for the coming month(s)

As mentioned we’ll spending the summer in one spot in Traverse City, Michigan. We plan to try to see as much of the state as we can during that time. This will be the longest we’ve stayed in any one spot since we bought the right. Our current record is just under three months.