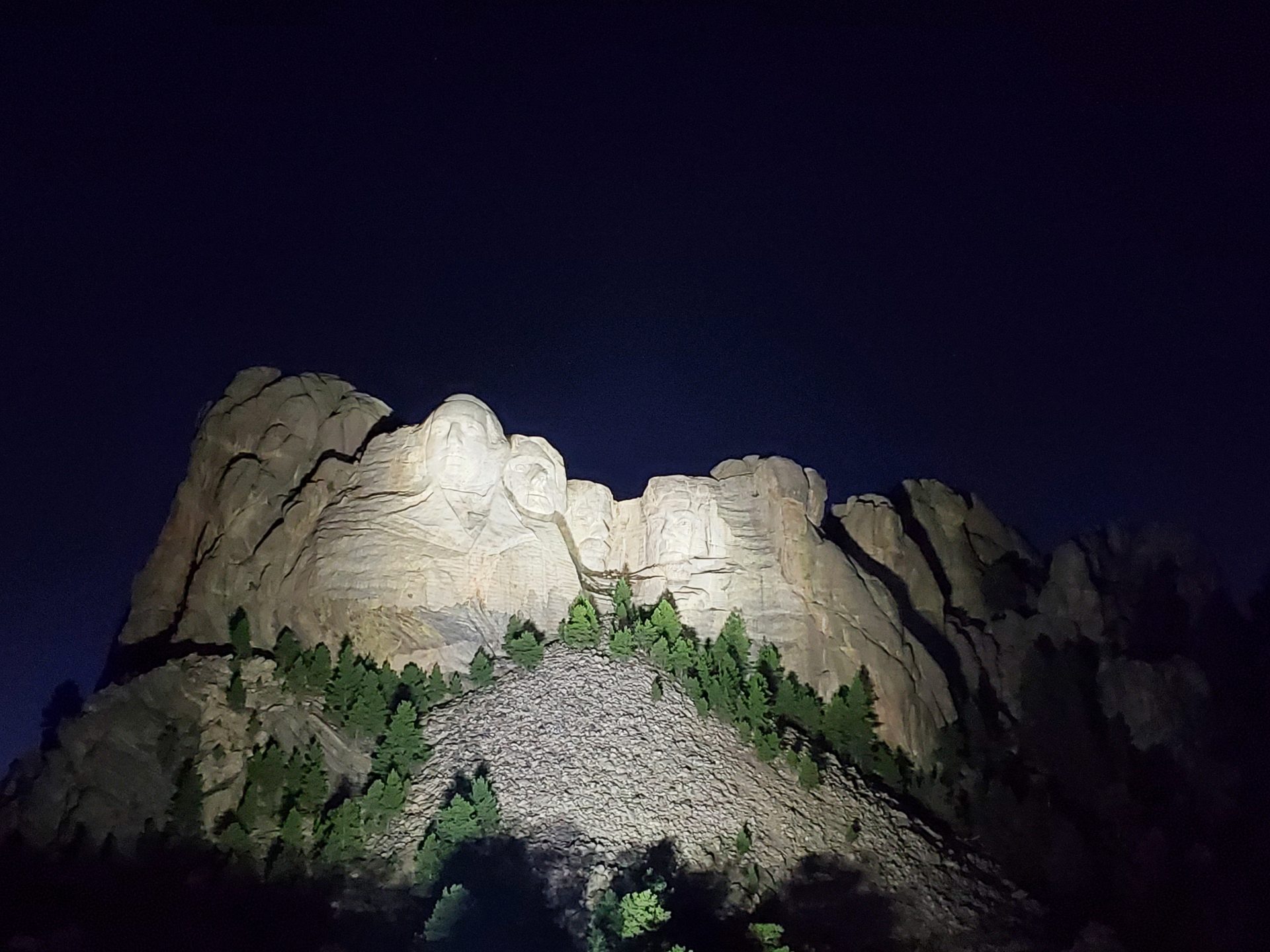 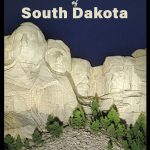 The Black Hills of South Dakota was our first major stop as we began our full-time travel life. Because South Dakota is 1500 miles from our starting location in Alabama, we did stop a few times on the way there. But, it wasn’t until we hit the Black Hills that we really took our time and enjoyed the scenery and all that our location had to offer.

One night in Wall, SD

Our first stop in the Black Hills was Wall, SD. As far back as Iowa we began seeing the road signs for Wall Drug, offering up free water and 5cent coffee. We’d heard about this place from friends and it seemed like everyone said we had to check it out. We’d also seen a few photos of the Badlands and knew we wanted to visit. If we’d had any idea of what to expect, we’d have planned a much longer stay close to the Badlands.

Wall Drug turned out to be a kitchy little tourist stop with a great story. Wall Drug opened close to 100 years ago with little fanfare and few customers. There was nothing in the area to draw people in and the town was really too small to fully support the store. But, that changed when the highway opened and people began pouring into the area from across the country to see Mt. Rushmore.

As the cars drove by Wall without stopping, Dorothy Hustead had an idea. What do weary road-worn travelers need on a hot day? Water! And, thus the signs began appearing offering free water to those passing by. The tourists came in for the free water and purchased an ice cream, a soda, or something else they needed as they passed through. Soon business was booming, and what was once just a small little drug store, now spans the entire block and then some offering everything from (really amazing) donuts, to lunch, to fudge, to jewelry and cowboy boots.

We didn’t stay long at Wall Drug. It turned out that our one night in Wall happened to be the same day as their Annual Wall Celebration & Rodeo – so not only was Wall Drug packed, the entire town was packed.

After a short stop to say we saw Wall Drug, we headed over to the Badlands, expecting nothing.

The Badlands – So much more than we expected!

We’d both seen photos of the Badlands and thought it looked really neat and worth a stop. If we’d had any idea we’d have planned much more time there. We arrived at the entrance to the Badlands at about 4pm and drove about 1/4 of the way around the loop, stopping at several lookouts for amazing views.

As sunset approached we knew we wanted to find a place where we could watch the sunset over the Badlands and enjoy the kind of beauty you rarely see. We made our way back, the way we came in and turned down the gravel road that takes you to the prarie dogs but we didn’t go that far. Instead, we stumbled across some Bighorn sheep. We stopped to get some photos and then drove just a little further until we found a spot we felt would give us great views of the sunset. The spot did not disappoint.

Once the sun set we headed back to our campground, waking up the next morning to continue our journey into the Black Hills.

Campgrounds in the Black Hills

Campgrounds in the Black Hills aren’t cheap, especially if you arrive in July, or worse – August. We arrived about a week into July and found most campgrounds priced at around $50/night or higher. Luckily, we were able to find two campgrounds that accepted Passport America for unlimited stays.

Elk Creek RV Resort & the north side of the Black Hills

Don’t let the name fool you. We’ve not stayed at an RV Resort yet that lived up to that name, and this was no exception. What was probably once a resort, is now just a campground. But, with Passport America the price was right (at around $27/night) and the sites were reasonably level. It’s located in a valley, making cell reception almost non-existent, but they do have free WIFI that worked well enough to let us get some work done. So, we stayed for two weeks and really have no complaints.

Elk Creek is located about 20 minutes north of Rapid City, and about the same distance from Sturgis, making the location perfect for visiting the sites on the north side of the Black Hills.

From our vantage at Elk Creek we made an afternoon trip up to Sturgis (in early/mid July it was just about empty, making it difficult to imagine just what it would look like the first half of August). We drove through Deadwood, but continuing our trend of visiting places during their annual whatever, found them packed for their annual 3-wheeler Days and Days of 76. We were also able to make the 90-minute trek up to Devil’s Tower in Wyoming.

Heartland RV Park & the south side of the Black Hills

After just a week in the Black Hills, we knew that two weeks would not be enough. However, we also knew we wanted cell phone reception (both for phone calls and for better internet). We booked eight days at the one other campground in the Black Hills that accepted Passport America and didn’t put a limit on how long you could stay with it. Even with Passport America it was a good bit more than Elk Creek (about $43/night) and with Sturgis approaching we could only get the discount for those eight nights.

From our vantage point in Hermosa, SD (where there’s pretty much nothing), we were able to take several drives through the Black Hills. We returned to Custer, SD for the second (and third time), we rented a Slingshot and spent an entire day just cruising the awesome roads, including driving through the Needles at Custer State Park, and driving Iron Mountain road. Iron Mountain road alone made renting the Slingshot worth it. Those views were just amazing, and we managed to catch like six different sunsets in one afternoon.

Our favorite experience in the Black Hills

Where we went in the Black Hills

Where we ate in the Black Hills

We love seeking out awesome places to eat wherever we may be and the Black Hills has no shortage of great food. We found the best BBQ we’ve ever eaten, as well as the best burger. We’d go out of our way again for either.

If you want to know where to eat, don’t just rely on the internet (especially in a tourist area), ask the locals. When we stopped at the Strawbale Winery in Sioux Falls, the owner Don told us that if we were heading to the Black Hills we had to eat at two places – Black Hills Burger & Bun and Alpine Inn. He was not wrong on either count.

Why we’d go back to the Black Hills

Three weeks is not enough time to fully enjoy the Black Hills. There was so much more we wanted to do. We still want to visit Deadwood and Mt. Moriah cemetery. We could have spent months there just hiking all the amazing trails. A couple of hikes that we really wanted to do were Bridal Veil Falls, Roughlock Falls, Vanocker Trail and Black Elk Peak (although I’m not sure we really could have managed the latter).

We didn’t get to visit any of the caves in the area (some were closed). We want to visit The Mammoth Site near Hot Springs. The Minuteman Missile Visitors Center was closed. There were several museums in the area we’d like to have visited had we not been avoiding crowds. We’d also like to do the trainride on the 1880 train from Hill City to Keystone, as well as zipline through the Black Hills. There were a couple of wineries up around Deadwood that we didn’t get to visit. We’d like to go up to Belle Fourche and The Geographic Center of the Nation. And, we’d definitely love to drive the Needles Highway and Iron Mountain road again. There was not much we experienced in the Black Hills that we wouldn’t repeat.

I’m sure there’s much more that will be added to our list of things we’d like to do there before we are able to return. We will return, and next time we’ll probably plan on staying a few months. We might even look into a Workamper job.

We’d love to know your favorite stops in the Black Hills. Please leave a comment below.