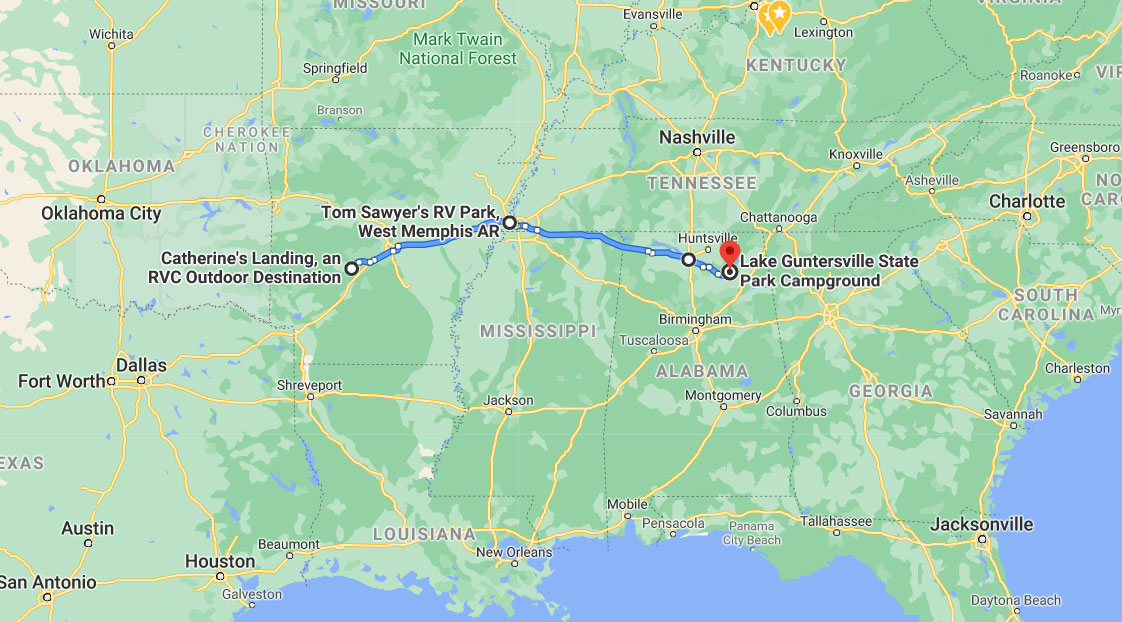 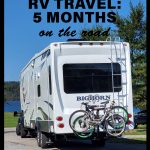 Our fifth month on the road actually took us off the road (sort of). While we’d planned to travel through the month of November before returning to Alabama, sometimes things don’t go as planned. Instead, we found ourselves starting month five back in North Alabama.

Month 5 by the numbers

Where we spent our fifth month on the road

With the exception of one night we spent the entire month back in North Alabama.

On the way back to Alabama from Hot Springs Arkansas, we stopped for a single night at Tom Sawyer RV Park. This was our second time there. We stayed there for a week over New Years. This park is right on the Mississippi River just outside of Memphis TN. While the general area of West Memphis Arkansas isn’t anyplace we’d recommend, and we wouldn’t recommend staying at the park on holidays that involve fireworks, the park is generally really peaceful. In addition to the views of barges floating down the river, they also offer free laundry.

Our first stop in North Alabama was Point Mallard Campground. We’d stayed there for about 3 weeks back in January and February and gotten flooded out. Because we’d originally paid for a month they still owed us about 10 days, so we decided to try to use those. We might have stayed longer but they are in the midst of completely reorganizing how they do things – and as a result are just completely unorganized right now and couldn’t guarantee us a spot for more than a week at a time. Instead, we just stayed a week and then headed on to one of our favorite places.

You may recall that we spent the first two months of the pandemic at Lake Guntersville along with several new friends from the RV Entrepreneur Summit. We loved it there and found it very peaceful (until it got filled with everyone coming out for the summer). We figured that things would be quiet again by now. We were wrong. This place is still crazy busy. It’s still worth it for the beautiful lake views and comfortable sites. We plan to stay here through the holidays.

If it wasn’t for a major repair and a couple of upgrades this would have been our cheapest month on the road yet.

Total site rent came out to $662. Granted a week of that was basically pre-paid back in January. But, even if we’d had to pay for that week we still would have been under our $1000/month goal. Unfortunately, we weren’t able to get a monthly site at Lake Guntersville, so our site rent will stay a little higher than it probably should be for staying in one place this long.

Our grocery bill was a bit higher than the last few months, coming in at $784. Our third highest/cheapest month for groceries on the road. The increase was likely a combination of being able to hit CostCo and stock up on a few things, and also being back at parks where we can use Instacart.

We discovered the convenience of Instacart when we were at Lake Guntersville State Park during quarantine, and we’ve continued to use it where it’s available. We’ve been able to get Instacart deliveries to about half of the campgrounds we’ve stayed at, and it makes things so much easier, than trying to find a local grocery store, park our giant truck, and brave the crowds. With tips to the delivery people it costs a little more than going to the stores ourselves, but it saves a ton of time and hassle. If you want to give it a try, you can use our referral link and save $10 on your first order.

Our dining expenses were the cheapest we’ve had so far at $190. Basically, what little we’ve eaten out has been drive-throughs or BBQ (which usually lasts us several meals). With COVID on the rise again, and local areas not tending to take precautions, we’ve avoided dining in.

Fuel costs were almost the cheapest so far, but not quite, at $388. That was two fill ups, one of which was just a few days before the end of the month and will likely last us through the next month.

Special expenses made up the bulk of our spending during month five, with $1478 spent on various repairs and upgrades.

One of our key reasons for heading back to Alabama earlier than planned was to have a few repairs done on our rig. A major chunk (just under $1500) of this months expenses went to RV repairs and upgrades. We spent close to $950 replacing the valves on all four of our tanks (yes, we have two black and two gray tanks), and having everything else inspected. We’d been having problems with the valves leaking for a few weeks, making it impossible to travel with anything in our tanks if we didn’t want a mess when we opened the cap.

We discovered D&N RV Service in Guntersville last spring when we needed to get our power reel replaced. At the time they were just convenient. One nice thing about this area is that there are several RV service options. Finding out that the owner Brandon is the current National Champion of RV Techs makes us feel pretty good about returning to them.

Another big chunk ($250) went to finally buying us a poop wagon, so that we can actually use parks that don’t offer septic. We’ve avoided staying more than a night anywhere that didn’t offer sewer hookup. Because we need to travel on the weekends, we usually stay in one spot for at least a week. Without sewer hookups we’d have to hook-up our rig and take it to the dump station at some point before the week was over. That’s just a lot of effort that we haven’t wanted to put forth.

A third big chunk went to pay for our (greatly discounted) 3-stage water filtration system from RV Water Filter Store. We’d already been looking at upgrading our water filtration game, so when they offered us a top of the line system at a greatly reduced price we couldn’t pass that up. We got the South of the Border system. We’ll be sharing more about that in and upcoming post.

We love being back at Lake Guntersville State park. The staff here are amazing and have gone out of their way to help us when they didn’t have to. We love having constant views of the lake. I think we’ve figured out that if we can keep water in our view at all times, we’re good. Everything else can be dealt with a lot easier when we have awesome water views.

While we were at Point Mallard we ordered a new GPS system, the Garmin dezl OTR 700. We’d been frustrated with trying to use multiple apps to figure out our routes. Google Maps always wants to send us down some side street that is tight even for our truck. We tried the routing feature in RV Trip Wizard and while it’s not bad, we just didn’t care for the actual voice/in-route instructions that it provides. We were hoping for something better. We went with the trucker Garmin over the RV one for a few reasons primarily because we are the size of a truck and because the reviews for the RV version tended to not be very good.

We gave this new GPS a try when we moved from Point Mallard to Lake Guntersville (we also used it a bit just running around in Decatur and Huntsville) and found that it generally was not reliable. While we hate that Google Maps tries to send us down roads we don’t want to take – at least those roads actually exist (and are open). The Garmin tried to have us turn down dirt two-tracks that weren’t even open to traffic and had no idea where it was going heading out to the state park. Luckily, we knew where we were going and had already double-checked our route anyway.

Needless to say we sent it back. We are considering ordering one of the Garmin RV GPS systems (send us your recs) before we head to Texas in January.

The biggest thing we learned this month was to plan ahead for ALL holidays. We arrived at Lake Guntersville on November 1 with a reservation for three weeks. After we arrived I went online to book us a site through Thanksgiving and found that the entire park was already completely booked.

We panicked for a moment before heading up to the office to ask if they could just put us in overflow for the holiday weekend. They would have done so, but luckily while we were there someone cancelled in a spot that we can fit in. Once we got that spot booked we made sure we had a site booked up through New Years.

We plan to stay here at Lake Guntersville through the holidays. It’s kind of nice to just have a calm place to relax for a little while. We’re close enough to be able to visit our families a bit, and see our doctors. After New Years we’ll be heading west again, back to Athens TX, to take an RV Maintenance course. It’s frustrating having a home that we don’t really know how to take care of properly. We’re going to fix that.